My favorite thing in hebrew (in online school)

Hey! How are you doing? I hope you are having a wonderful day. Today’s post is all about my favorite thing we did in hebrew since online school happened. Alright, my favorite thing was when we got to make our own snowman, we made our own copy of the slide, and we copied and pasted the eyes, mouth, hands, shoes and hats. If people wanted to add a nose, they would look up a picture and copy and paste it.

Here is my snowman : 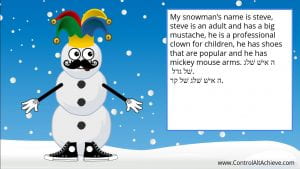 I remember having trouble learning the articles, I know it now, so I want to help you learn them too :

Definite: (I want that one)

Sometimes when a word ends with an “E” it is feminin, sometimes a word is acceptable to start it with “Le”, if a word does not end with an “E”, then it is masculin.

Indefinite (I want any)

When there is a word that ends with an “E”, it is most likely to have an “une” in front of it, for example : Une table (a table). But this does not work all the time, some words are feminin without an “E” at the end, but you can use larousse.fr to help you.

If a word is masculin, you have to spell “un” in front of it. Again, you can use larousse.fr to help you.

Remember, if a word is plural, you must put “des” in front of it because it is more than one thing.

Partitive (I want any)

( When you use Partitive articles, you are saying you want something but not saying how much you want. )

Des (before a plural noun)

Du (before a masculin noun)

De la (before a feminin noun)

Recently in science, we have made our own “model arm” . We used everyday tools to create a wonderful project that can move just like a regular arm. We followed some easy instructions to make it, after that, we could move the arm like a regular one.

Here is little video of how to make it and what tools to use :

At the beginning, my hypothesis was that when I finished the arm, I thought I will mess up a few times but then It will work.

My conclusion was that it worked! I did not mess up and it worked!

Hi! It’s Maya, hoping you are having a wonderful day!

Today’s post is all about what we are currently doing in ART. We are making a fun and fascinating project called ROBOTS & DONUTS. Before we got started, we learned about Eric Joyner. Eric joyner was the creator of the art Robots & Donuts. At first, he has made random pieces of art for different countries. A few years afterwards, he started painting what he likes, including robots. He realized there was something missing, he had an idea while watching a movie, he should add donuts to his painting. It was very creative, the robots were the good guys and the donuts were the bad guys. 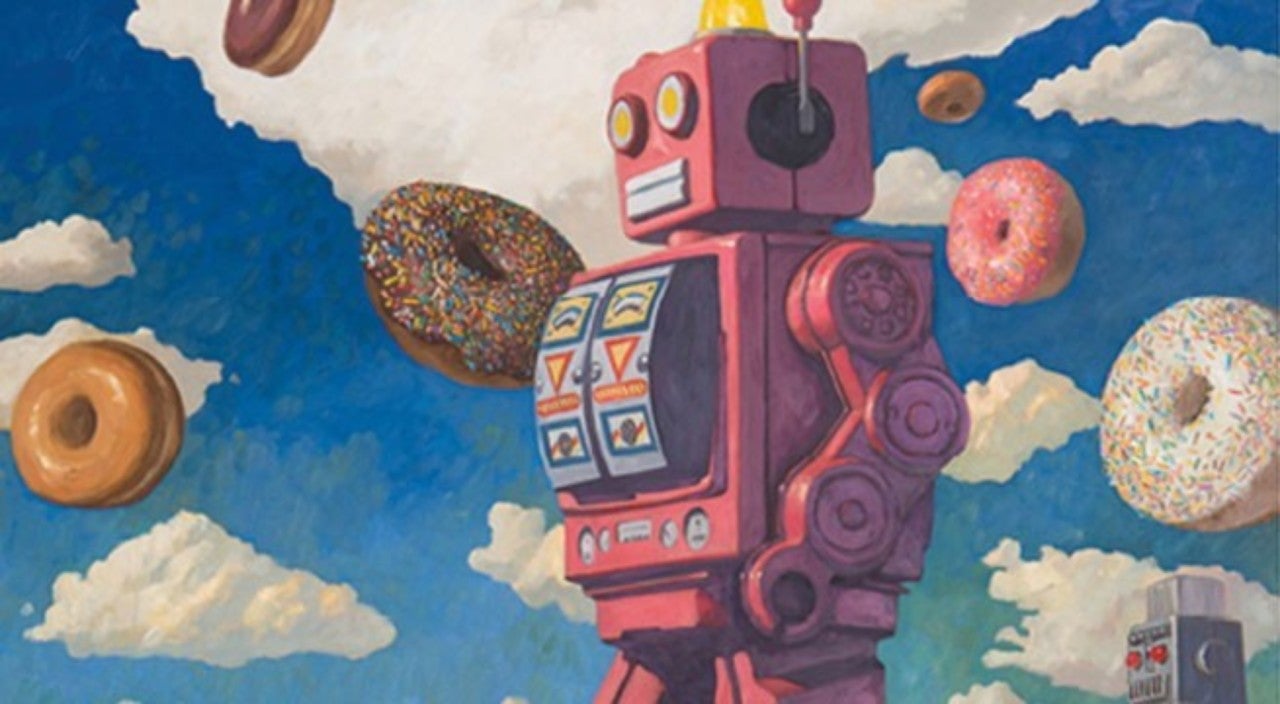 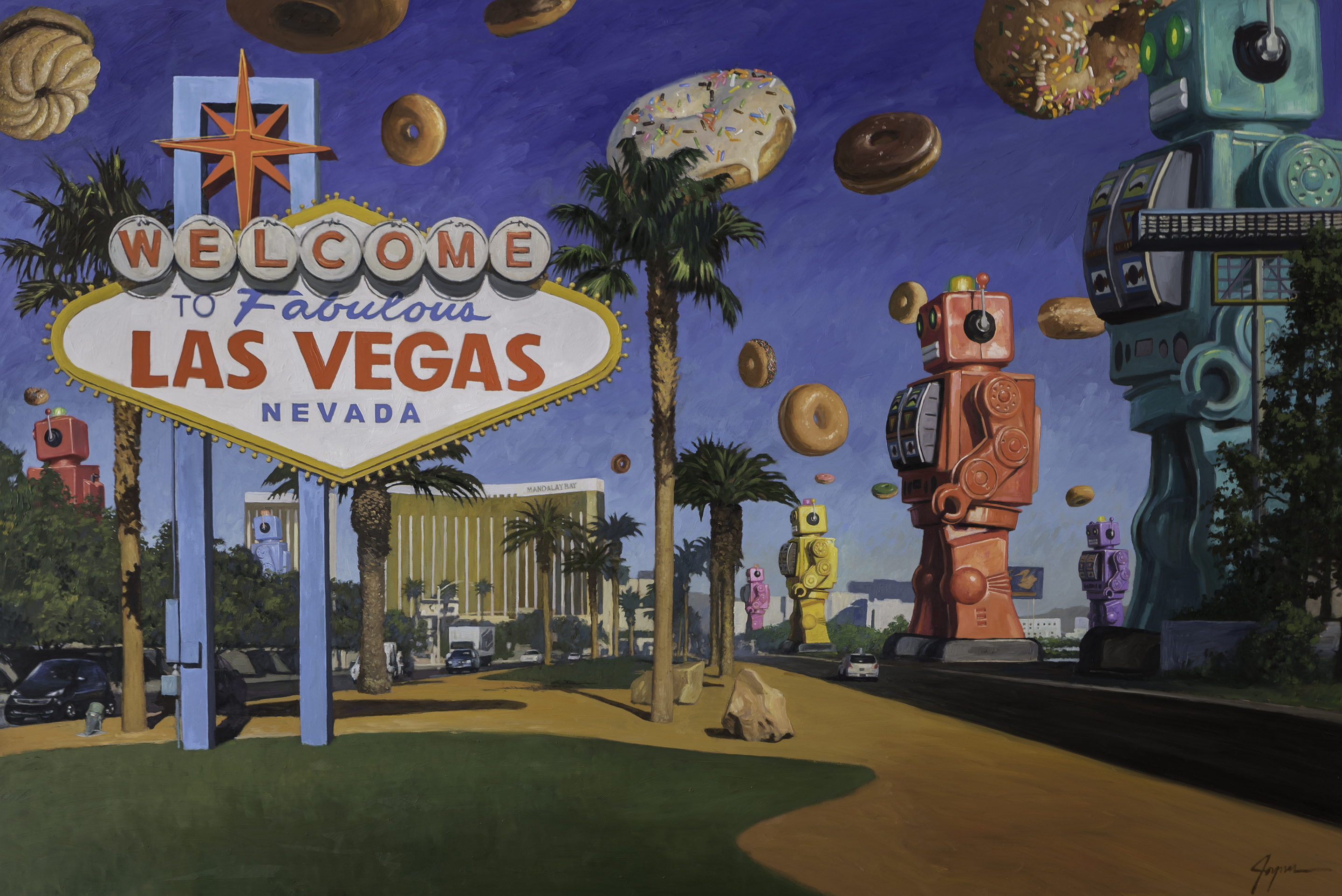 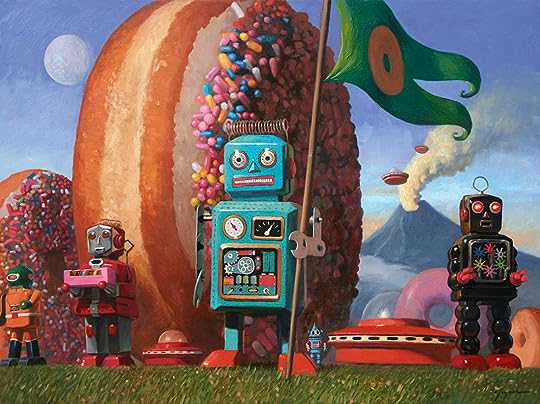 Here is a video down below :

Earlier this year my class has watched this amazing video, the video was about this one kid who was into video games, he made his own arcade, made out of cardboard! He started with one customer, then he was on news, he had so many customers (maybe over a hundred!) After we stopped watching the video, we were told by our teacher that we will be making a project called Genius Hour, or just GH for short. The GH was a project we had to make of our interest, but we weren’t allowed to do it in pairs because it has to be something that YOU are interested in. When I was thinking of what I should do for it, I had some trouble, but then I had a great idea! If you have read my other post, you know that art is my passion and I love it, so I have decided to make an art tutorial all about character design. I am having fun making it, and I’m learning so much! I can’t wait to see how it will turn out, and I can’t wait to see others!

Hey guys! Welcome back to Maya’s blog! Today’s post is all about “art”. Hope you enjoy it!

Art has been a part of my passion ever since I was little ( Probably two years old ). When I started drawing people, I drew them without hands or necks, and I remember making the shoes just circles. I remember how I kept drawing this girl over and over again, the girl had :

I have improved my art in all of these years. If you see my art and ask “How are you so good at art?!” I would say “It’s good because I don’t have to do it, I want to do it.” I really enjoy art because, well, I’ts hard to explain, it’s just fun ( For my opinion. ). When I grow up I want to become a cartoonist, and maybe work for disney! I want to be a cartoonist so I can continue my art journey. A few months ago, my parents found out about this art high school, whoever wants to have a job that includes art ( So as cartoonist, fashion designer and so on… ) can go to this school to learn it. But, if you want to join, you have to have good marks on each subject, so I will try hard to study.

I hope you liked this post, have a wonderful day!

I am sorry for what happened at halloween. I will be very happy if you change your mind about not coming to school . I will advise you on the situation between yourself and Jack Will. Here are some reasons (on my opinion)  why you should come back to school :

I hope these reasons  are reasonable!

I love mickey mouse, maybe a bit obsessed. Mickey mouse has been made over 90 years ago, and it made many peoples childhood very happy, it’s making my childhood happy.So many people in this world have seen Mickey mouse’s cartoon. I just got Disney + and there are so so so many Mickey mouse movies!

Here’s some video’s! Look and think how different they are.

My opinion on mask wearing is that it is not fun. Mask wearing is not fun because they are “hot”, “uncomfortable”, and they don’t let you breath. Sometimes I have to reuse an un-reusable face mask, and they end up hairy ( Not my hair, I mean a bit of the mask comes off , and it feels like hair. ).  Sometimes when I play bump I lose my breath, but when I try to breath the mask is on me, but it doesn’t let me. I try to find a spot where no one is near, when I get there I slowly take my mask off, breath for about one or two minutes then I put it back on.

I disagreed when  Dr. Klitzmen took off his mask because he wanted to eat cake, he had to keep everybody safe. I REALLY disagreed with the people who kept getting closer to Dr. Klitzman when he was backing off. I know that masks are very uncomfortable, but we have to wear them for others safety, the more we all wear masks, the quicker the pandemic will end and the quicker we can take our masks off.