Hey guys! It’s your pal, Maya. Today I will be talking about my innovation project which is solar energy themed. When we are making this project, our goal is to figure out a way of how to use solar panels in parks, without  it hurting the environment. As I said earlier, I am doing my project on solar energy, solar energy is when you use this material called solar panels (often found put on roofs), the solar panels take energy from the sun to makes electricity (that’s why your told not to touch them, they’re reallyyyyy hot). The sun sends little balls of energy called photons  to earth, after 8 minutes and twenty seconds it hits earth, and that’s when the solar panels come in and do all the work.  We are trying to add solar panels to parks for wifi. You might think what happens at night, when there is no sun, for that we use wind, but that’s not my project 😋.

In this project I will be making a model of a park with solar panels, sometimes our parents need to do work but their children are forcing them to take them there, so it would be great to have some wifi, and at these times (corona) it would be really useful.

Here are some videos about solar energy:

Here is a little drawing I made of a park with solar panels (It’s a little unrealistic 🙄): 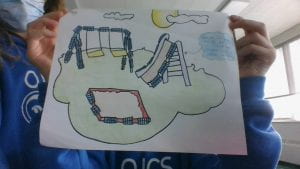 After a few classes, I wanted to make it out of clay, so I did. After a few more classes, I realized it was a bit unrealistic, so I did a few changes. Here it is in a video :

I hope you know more about solar energy! Bye!