Hi guys! It’s me, Maya! Quick news, my new ‘nickname’ is MJ, because A: I love the character, and B: It’s my initials, so why not?

Anyways, today’s blog post is all about the new project my class has recently been working on… we got to choose our own book to read, and after we finished we would work on our own special artifact, and I will tell you all about it in this blog post…

Like I told you earlier, we had to choose a book for the project (because if we didn’t, there wouldn’t be a project). The book I chose wasn’t one of those fantasy books like ‘Harry Potter’, or ‘The land of stories’, even though those books are AMAZING, I decided to go with a meaningful (and a little bit sad) true story. The book is called ‘Out of hiding’, and it’s about this Holocaust survivor named Ruth Gruener, and about her journey to America.

Fun fact: her name wasn’t even Ruth Gruener in the beginning! Her name was Luncia and she lived in Austria (NOT Australia, AUSTRIA), but when she moved to America, she changed her name to a more American one, and she got her last name (Gruener) when she married Jack Gruener, also a Holocaust survivor, who survived 10 concentration camps!

Ruth/Luncia had a very hard time during the Holocaust, and she’s escaped death several times!

When she miraculously survived the war, she moved to New York, but she had trouble fitting in, but she eventually did.

Also, like I said earlier, after we finished our book, we needed to make an artifact.

We were given a doc with a few choices of what our artifact could be, and one of the choices was a BOARD GAME. As soon as I heard the idea I absolutely loved it.

I love to play board games, like ‘Sorry!’, ‘Candyland’, ‘Pictionary (yeah, there is a board game version)’. At the beginning I was like “Wait, how am I going to make a board game about the HOLOCAUST? Board games are usually all fun and colorful, but the Holocaust is sad, but also supposed to teach you a great lesson in life, to treat others with full respect.’

I was second-thinking, I wanted to show that the people that survived had to go through so much, but I was also thinking, people like to learn more by playing games, so I thought ‘Yeah, let’s do a board game.’.

How to play and what the squares mean:

First of all, you pick your character, the choices are Ruth, Barbara and Isaac Gamzer (her parents), and Jack Gruener (Ruth’s future husband). Anyone can start. The person starting will roll a die, and whatever number you land on, you move that many squares, and the game keeps going until there is one person left.

But, not all the squares in the game are normal, you might notice that some of the squares have a little sparkle, or an X. If you land on the sparkle (or you moved past it by a little bit), it means that your in an important part of the story, like maybe Hitler is taking over, you are hiding from the Nazis, or that the war is finally over and you can move to America!

But sometimes the punishment cards can be GOOD. Hiding in the stack of the cards, there are a few LUCKY CARDS, they say really good things, like choose a punishment for someone else.

Do not get worried if you land on a square that is colored pink or has a picture on it, that’s just for decoration.

Why I included a few of my drawings and photos:

I wanted to add these photos to show how much Ruth has grown and how much she’s been through. I added a photo of the book in one of the squares just in case people were wondering what it looks like. I added the symbol that the Jewish people had to wear for them to be identified, if they were walking around without it, and one of the Nazis would see their identity cards, they would be killed. There is a drawing of the American flag, because that’s where Ruth traveled after the war.I drew a boat on the board because that’s what Ruth used to travel to America.

Now how you know how to play, I hope when you do you will have as much fun as I did making it.

Here is a picture of the board game itself: 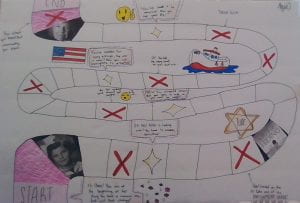 Sorry I didn’t add more pictures, but this post is due tomorrow! (Well, probably not tomorrow because your probably reading this post a few months after I posted it…) Maybe soon I will edit it and add more!

Bye, see you next time!